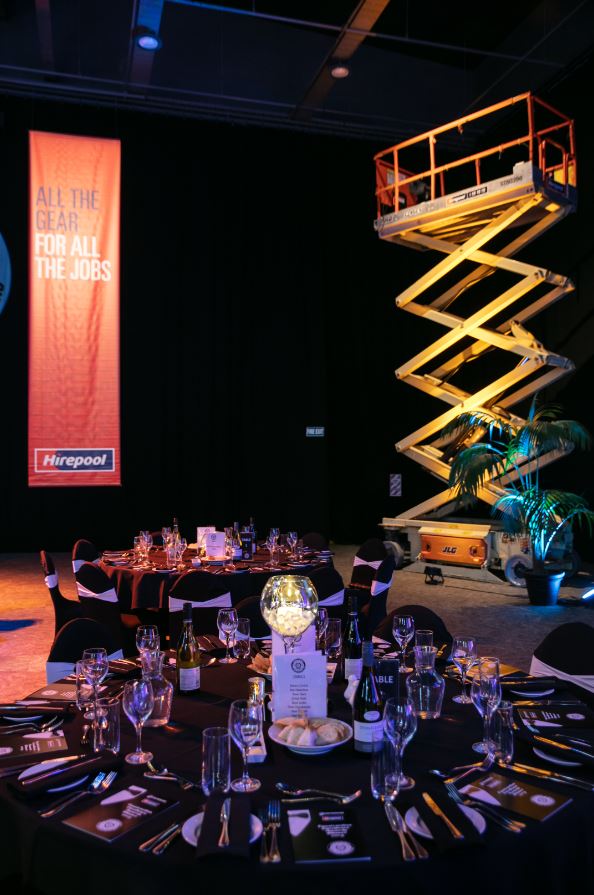 A world record-breaking pipeline in Auckland, a Hawkes Bay roading project, an Auckland wastewater station and a stormwater project in Wellington were amongst the winners of the 2019 CCNZ Hirepool Construction Excellence awards in Rotorua on Friday 2 August.

"These events are about recognising great Kiwi organisations and the work they do for Kiwi communities. The level of excellence within our civil construction sector is something Hirepool is proud to support. I encourage people to take a moment to acknowledge the great people behind these projects."

McConnell Dowell won the ‘Projects with a value of between $20 million and $100 million’ category with its Army Bay Ocean Outfall project at Shakespear Regional Park - a project which resulted in the world’s longest pipeline built using trenchless tunnelling technology at 1.9 kilometres.

Higgins Contractors won the ‘Projects between $5 million and $20 million’ category for its Watchman Road Roundabout and airport intersection project in Napier which created a safer intersection with special regard for an adjoining wetland. HEB Construction was also highly commended in this category for its work extending the wharf at Port Otago - a project that required deep pile driving around a ‘minefield’ of underwater boulders.

Fulton Hogan won the award for ‘Projects up to $5 million - larger companies’ for the Wynyard Quarter Pump Station - a 14-metre deep wet well pumping station situated in the heart of Auckland which required innovation to work at depth well below the water table.

The award for ‘Projects up to $5 million - smaller companies’ went to Concrete Treatments NZ for restoring the South Karori Stormwater Culvert in a project which replaced rusting corrugated iron tunnels underground with a new geopolymer lining. Canterbury-based Rock Control was highly commended in this category for its work stabilising a 100-metre cliff face above the highway and rail lines south of Kaikoura following the earthquakes which devastated the region.

The award for excellence in the maintenance and management of assets went to HEB Construction for its work maintaining 2,600 kilometres of roads across the Selwyn District with excellence and significant cost savings thanks to extensive use of data.

Civil Contractors New Zealand Chief Executive Peter Silcock said these awards represented important recognition, not just for the skilled people who worked on planning and construction of these projects, but also for the excellent outcomes they brought to local communities.

"It’s important we take the time to recognise a job well done. These projects are vital for the economy and wellbeing of their communities. We should be proud of the people who got the job done, and the outcomes their hard work has achieved."

This year CCNZ introduced a new award to recognize major associates (key suppliers) to the industry and the inaugural award was given to Hirepool!

Peter Silcock, CEO of CCNZ presented the award and said the following about Hirepool:

“Hirepool have been CCNZ’s Principal Business Partner for 15 years, providing both financial and in-kind support to the organisation. They sponsor tonight’s dinner and Construction Excellence Awards, they are a major sponsor at the Conference, a sliver sponsor of our Excavator Competition and as part of our Principal Business Partner Agreement provide funding for events in every branch. Their staff also step up to support us at Branch and national level on a regular basis.
Hirepool provides amazing support excellent innovative service. And they are looking to the future too, launching new services such as a new digital platform, opening pop-up branches on large sites and adding new aspects to its business such as the recent acquisition of Trench Shoring NZ.
In the community, Hirepool sponsor Sustainable Coastlines. That is all about enabling Kiwis to look after the coastlines and waterways they love. Earlier this year Hirepool worked with Sustainable Coastlines to present The Big Clean – an event that resulted in the removal of more than 100,000 pieces of rubbish, amounting to 9.2 cubic metres from the Onehunga foreshore. They have also had a long association with the Auckland Rescue Helicopter Trust. They assisted the Trust to improve training for pilots with the launch of a new Flight Simulator. This was made possible by Hirepool’s provision of a purpose-built trailer to house and transport the new device, which has enabled the Simulator to become a valuable fund-raiser for the Trust.
The Hirepool brand has been operating and supporting civil construction for over 60 years. With a national footprint of 70 branches from Whangarei to Invercargill Hirepool offers nationwide capabilities, a well-maintained fleet and knowledgeable staff who go that extra mile. It is certainly a real pleasure to work with Brian Stephen and his team. Congratulations Hirepool, the recognition is well deserved.”