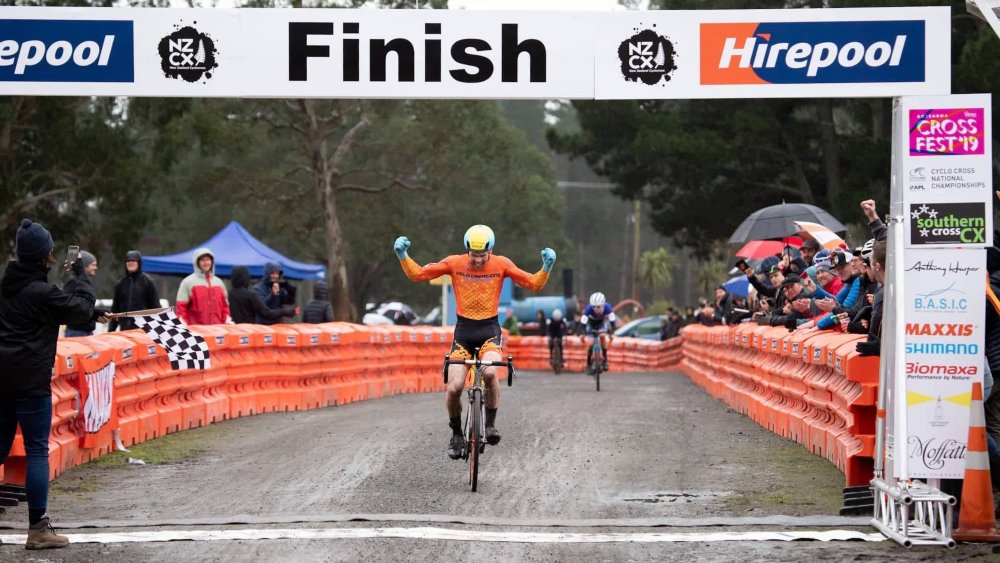 There was plenty of mud, sweat and tears over the weekend of the 10th of August as Christchurch hosted its first national championship Cyclo-Cross event. The two day “Aotearoa Cross Fest” kicked off on Saturday with hardy competitors braving wet and windy conditions to compete in a series of fun races at Steam Scene, Mcleans Island. With the sound of cowbells ringing in the air, and events for riders of all abilities, there was plenty of smiles from spectators and competitors alike.

Sunday brought clearer weather, and with it serious competition for both the national age-group championships and for the first time – UCI-sanctioned New Zealand Elite, Under 23 and Junior titles.

The Junior Men’s race kicked off the UCI series with a small, but very competitive field. Local lads Jacob Turner and Jordan Sutherland battled alongside Boston Bright and Jack Sheridan, with all four riders looking like they were in for a shot in the final sprint. Unfortunately, Sutherland was out after clipping a barrier in the pit straight, leaving Turner to burst out from the final two corners for a sprint victory.

The hotly contested Elite Women’s race was a battle between New Zealand’s first woman of Cyclo-Cross– Wellington’s Kim Hurst, and multi-sport NZ Champion Kate McIloy; a recent convert to the sport. An early attack saw McIlroy pull away in the lead, a position she maintained throughout the race to win the national jersey.  Young rider Annabel Bligh was 3rd over the line to take the U17 amateur title in what was a stellar performance from the up-and-coming mountain biker.

A fast and furious Elite Men and U23 National concluded the racing with Wanganui former-pro Brendan Sharratt taking the honours from Counties-Manukau rider Nick Miller. Christchurch’s Campbell Pithie rounded out the podium, claiming the U23 title in his first season. An emotional Sharratt said the result was a culmination of ’27 years of racing’, breaking in to tears as he was awarded the New Zealand jersey.